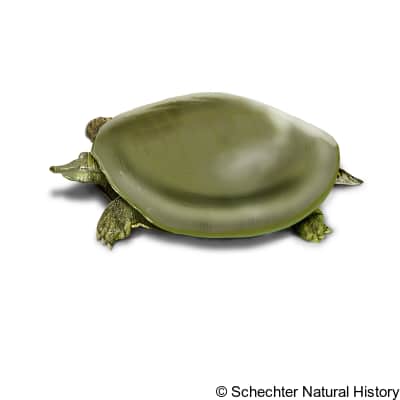 Native to China, but introduced populations are established in Kauai and Oahu, Hawaii. Sightings have been reported in New York and Maryland, but it is not established in those states. Introduced populations also exist in other Asian countries, as well as Spain and Brazil. These introductions are a result of escapees from captive farming operations, as its widely used to make turtle soup.

Soft, leathery round to oval carapace ranging from 4.5-13 inches in length, with females being larger than males. They lack hard scutes on the shell. Adults are uniform olive grey or greenish brown in skin and shell color. Juveniles have black spots with yellow borders that disappear with age. They have a long neck with a large head and pointed face. Their nostrils are elongated into a double-tube shape used as a snorkel. They have pale spots around their mouth. Plastron and ventral skin is lighter and sometimes reddish.