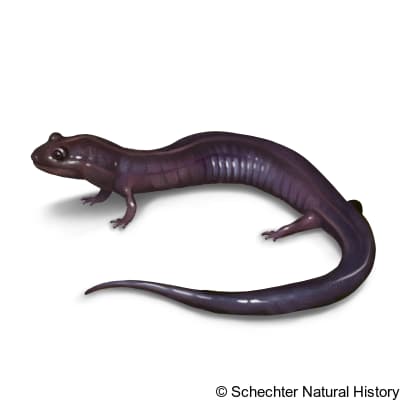 The Red Hills salamander (Phaeognathus hubrichti) is a large, terrestrial salamander endemic to Alabama, USA. They have a small range between the state and the Conecuh rivers, spanning just six counties, Butler, Conecuh, Covington, Crenshaw, Monroe, and Wilcox.

The Red hills salamanders typically live in burrows, found on steep, reasonably shaded, shrub-covered slopes. They are stealthy predators; they wait and ambush prey as they pass by their burrow entrance. The salamanders either catch prey with their jaws or with their short tongues, hunting only at night and rarely travel far from their burrows. Males generally become reproductively mature in less than a year, while females usually take around 5-6 years to reach maturity. After mating, females carry eggs in their oviducts for 20 days, after which they are then laid. It takes approximately 20 days for young to hatch and emerges.

The Red Hills salamanders are large creatures, averaging around 10 inches in length. They belong to the Plethodontidae family and are therefore, lungless salamanders, and breathe entirely through their moist skin, which is dark brown to dark gray in color, without markings. They have relatively short limbs with long prehensile tails, being almost 47 percent of its entire body. Males and females typically grow to the same length but differ in body proportions. Males have shorter tails, longer bodies, and thicker heads. They are adapted for their burrowing lifestyle, having a thick skull, modified eyelids, and small nostrils.