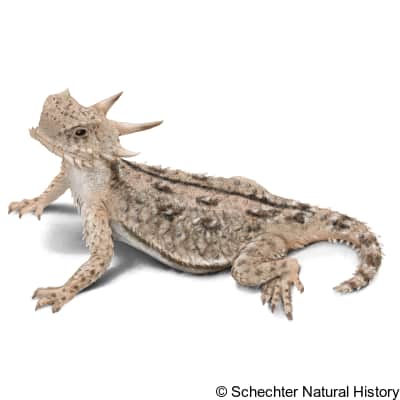 The flat-tailed horned lizard can be found in the Sonoran desert of Southwestern Arizona, South Eastern California and Northern Mexico.

The flat-tailed horned lizard can be seen in flatlands and low dunes with a loose sand substrate where it basks in the midday sun. The diurnal creature relies on its cryptic coloration when threatened. It feeds on insects such as ants and due to its dry habitat, gets it water needs from its food. The flat-tailed horned lizard is oviparous, laying between 3 to 10 eggs in a clutch. This amphibian is threatened and protected by state laws of California and Arizona.

The flat-tailed horned lizard is usually no more than 3.4 inches long. It is a wide and flat lizard that carries on a relatively broad and long tail. It has a black stripe which runs through the middle of its back along with a handful of pointed scales. Projecting from its head are six long scales which look like horns. The two scales in the middle are conspicuously larger than the others and smaller pointy scales stick out from both sides of its jaw. On both sides of its body are two pointy amplified scales. It is tan, brownish-red or orange-brown depending on the sand upon which it lives. On its back are rows of dark gray-brown circular spots. The dorsal area is plain and pale with dark stripes.