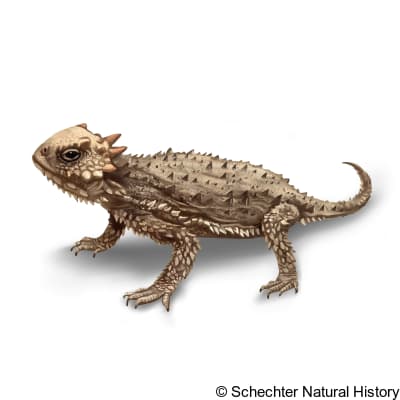 Ranges throughout the inland west, from southeastern Oregon and southern Idaho, south to the northern Baja Peninsula, including all of Nevada, western Utah and western Arizona, as well as southeastern California.

Inhabits a wide variety of habitats throughout its range, including desert scrub, chaparral, woodland, grassland, and prairie. It generally prefers sandy or loamy soil where ants (its primary food source) are prevalent.

This small, wide, flat-bodied lizard has distinctive spiked scales along the sides of its body and on the back of its head (occipital horns), forming a crowned appearance. Its face is blunt and stubby, with spiked scales along the bottom jawline. It has a relatively short, stubby tail. It has bumpy scales on its body, giving it a rough texture to match its surroundings. Its colors are a wavy, blotchy mixture of earth-toned brown, grey, cream, and rusty red, that come together to form bands on the tail. It typically has 2 black patches on the back of its neck, and may have pink or orange shading on its sides. It reaches almost 4 inches from snout to vent.