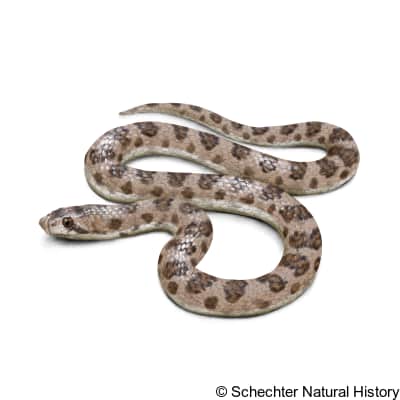 They thrive in sandy desert regions including open flats, alluvial fans, foothills, and washes. Their habitat sometimes includes semidesert grassland. They are found in creosote bush flats as well. They are nocturnal and burrow in the ground, spending most of their time in the soil. Females lay a clutch in summer, clutches contain up to six eggs. The eggs hatch in July. These snakes feed mostly on eggs of lizards and other snakes. Although they do feed on other lizards occasionally.

The Phyllorhynchus decurtatus is a small snake usually between 12-20 inches. It is pale tan, cream, pinkish or grey with over seventeen brown blotches on the body from its head to tail. There are tinier blotches of brown on the sides as well. There is a line that runs from the eye to the lip. It has an enlarged and raised rostral scale that resembles a folded leaf which is the source of its name. It has a blunted snout and a sturdy neck that can barely be differentiated from the head. The belly and underside are plain white or grey. The pupils of this snake are vertical. The scales of this snake are smooth but males may sometimes have weakly keeled scales.