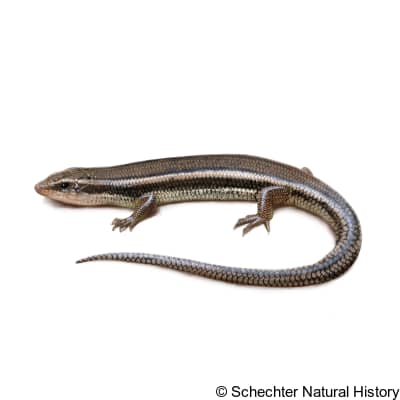 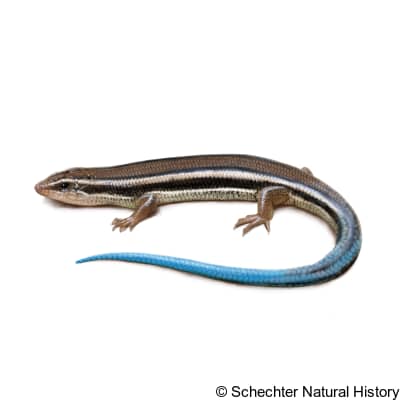 Are capable of adapting to various environments but are most commonly found near water sources in grassland, dry open woodlands, shrub-steppe, and rocks. Use the underside of rocks as shelter and a place for females to bury eggs. They are inactive for a time during cold weather that varies depending on local climate. Diet consists of earthworms, spiders, and a variety of insects including crickets, beetles, and flies.

Adults possess cream, tan, and brown stripes running down their backs. Some stripes start at the jaw line and run to tail. Distinguishing features of juveniles include bright blue tails and skin that is overall more vivid than that of their adult counterparts. Their tails fade to gray before adulthood but will keep a trace of blue. Adults exhibit reddish or orange color on the side of their heads and sometimes on the underside of their tails during the breeding season. Typically are small to medium sized compared to other lizards and can reach snout-vent sizes of 76 mm (3 in.) and 201 mm (7.9 in). Once it hatches its eggs, the female displays parental care by repairing the nest when needed, staying close to the eggs, and protecting them from predators.