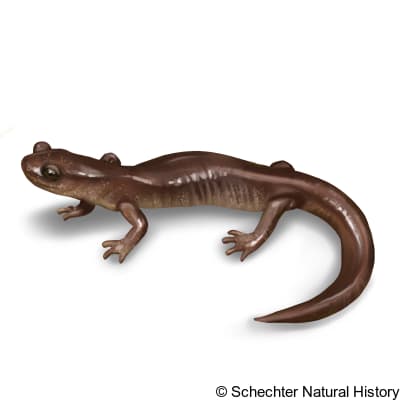 This specie inhabits in the forest, in shaded, moss-covered talus slopes mixed with evergreen and montane fir forests. They could also be found in mill creeks. Its reproduction pattern is poorly studied but likely similar to that of Plethodon elongatus whose mating occurs in the fall through early spring. Eggs are laid in spring or early summer. They feed on various invertebrates.

Scott bar salamander is robust, average-sized salamander with long limbs growing up to 61 mm for males and 67mm for females, with its tails taking up about 50.6mm of the length for males and 57 mm for the females. It has a relatively long hind limb and forelimb. It has brown or bronze dorsal stripe which extends from its heads to its tails and underparts with dark gray or purplish blotching. Its sides are brown colored. It usually has gold spotting on its sides and limbs. It also has gold flecks on the upper and lower region of its eyes. This specie of salamander lacks lungs but respires through its moist skin.