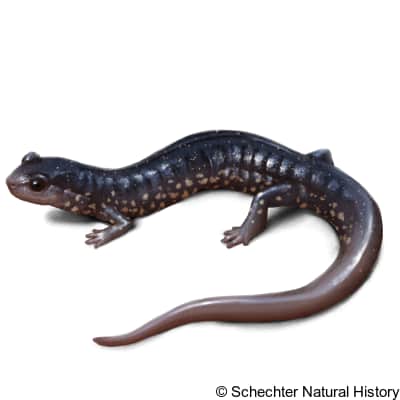 Atlantic Coast Slimy salamanders are completely terrestrial and found in the coastal plain. In North Carolina, these salamanders are most saturated in moist forest floor habitats in deciduous forests. It may also be found in pine forests, bottomland hardwood forests, and caves. Generally, these salamanders at every nocturnally. This causes them to seek shelter under covered objects during the day. Also, their activity levels are proportional to moisture levels. Lastly, they avoid dry and cold extremes. They like and move to moist and dark areas. They feed on spiders, phalangids, ants, beetles, smaller salamanders and so on. The females lay eggs yearly in the late summer or fall under logs or in underground cavities.

This species of salamander is black to blue-black with silvery-white spots or brassy flecks. It could also have both. Their bellies are normally lighter than their dorsum. The adults average 4.5 to 8 inches in total length. They are “sticky” salamanders whose skin-gland secretions stick to your hands like adhesive and almost have to wear off. Eggs are laid in or under logs and among roots but are hardly found. Females lay eggs yearly in summer or fall. This usually happens in the coastal plain. The Atlantic Coast slimy salamanders get their name from the extremely sticky skin secretions that they use to dissuade predators.