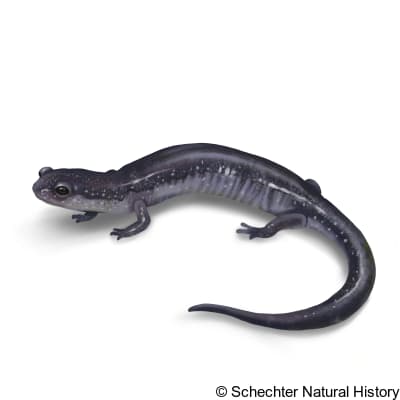 It is associated with the temperate slopes of woodland ravine and valleys and gets its general name from this. It can be found under a flat rock, and during hot summers they burrow deep into the ground. The ravine salamander resumes its mating period in autumn through early spring. Its female reproduces biennially, it oviposits (around June) in deep underground passageways and will brood their eggs till they hatch. When its eggs hatch in late summer (August and September) the hatchlings will stay underground and usually move up to ground in the following spring. When rattled or uncovered in a field, they camouflage by pretending to be dead or motionless in order to convince an intruder that it isn’t there. This species feeds mainly on small insects, the likes of ants and beetles but they are prey to reptiles like the ringneck snake, their major predator. It aestivates in July and August and in February it hibernates.

This salamander appears as a “worm with legs”. It is very long and slender but has short legs and the tail makes up to half of its total body length. When it reaches adult stage, it can grow up to 75mm to 140mm. The male is distinct from the female by being larger in size and also having a conspicuous mental gland on its chin. The color of the dorsum is seal brown to a near black and sprinkled with silvery-white and bronze speckles. Its sides have very small irregular white blotches and presence of about 20- 33 coastal grooves. The underbelly is dark gray with lighter gray speckles and this feature causes the chin to look heavily mottled. It is also ectothermic