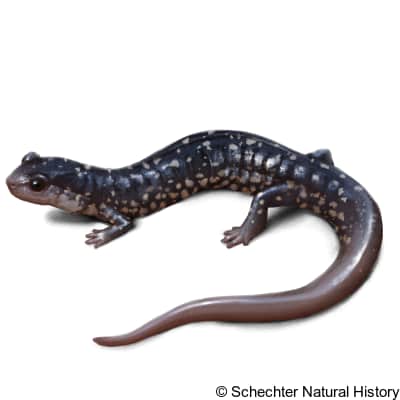 This specie is endemic to the Ouachita Mountains in the United States. Here, it is restricted to the Beavers Bend State Park in Oklahoma and a small part of the extreme southwestern Arkansas.

They can be found in wooded ravines and canyons in limestone-fissured habitats. They are usually active during the cooler months but during the drier times, their activity becomes based underground. The females lay a cluster of eggs which are laid in the summer or early fall. Their diet is made up of ants, beetles and sowbugs.

The Sequoyah Slimy Salamander has large, protruding eyes with about 15 – 17 coastal grooves. Their length ranges from 120 – 170 mm including its tail, where its tail length is roughly half its body length. Its head is a bit wider than the rest of its body. It also has small eyes. They have a dorsal ground color with white or brassy flecks spread across its dorsal and lateral surfaces. It also has a white throat. This specie’s ventral surface could be grey and speckled with pigment. But this ventral surface is noticeably lighter than its dorsal surface. As implied by its name, this specie produces a slimy substance from its skin when it is handled.