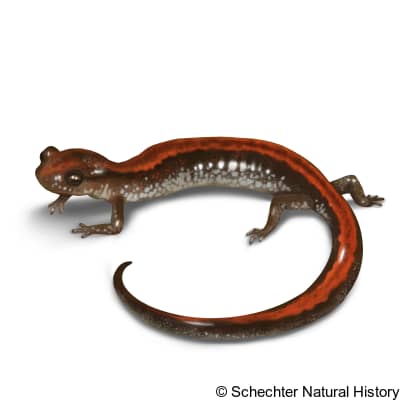 This specie of salamander can be found in four different locations in the United States and they include: Central Louisiana, the Ouachita Mountains of West Central Arkansas and Southeastern Oklahoma, Central and Southeastern Missouri, Southeastern Tennessee to Southwestern North Carolina to Northwestern Georgia and Eastern Alabama.

They are mostly found in moist sites. Their juveniles stay at nest site or several months after hatching. They can be found in different moist sites in different locations. In Louisiana, they are found on slopes with sandstone rocks and sandy or clay soil. In Arkansas they can be found under logs and pile of leaves along streams. In Georgia Pediment, they are found around hilly terrain covered by moist deciduous forest. They are active during winter. They migrate underground during dry seasons and come back up in the winter seasons. They tend to show aggressive behavior like head bobbing, snout touching, biting, griping and chasing. They also show submissive like flattening the body and fleeing from an opponent. They feed on small invertebrates, arthropods, mollusks, ants, termites and flies. They breed during the cold winter months, mostly between December and march. The females hatch 4-10 eggs. They get ready to reproduce 24 to 36 months after hatching. The females breed biennially or annually while the males breed annually.,

The southern red backed salamander is a small woodland salamander with a narrow body and short legs. Its color varies from dark gray to black or brown. The color seen on it, can be classified using two color morphs. The first color morph is the stripped color morph which has the following characteristics: its dorsal surface can be either dark grey or brown color with an orange or red fading stripe extending from the head to the tail. The stripe can described to have a saw toothed appearance at the mid dorsal region where the stripe meets the side which has a dark color. The second morph which can also be called the unstripped morph, has on is dorsal surface a brown color with a variable amount of red spotting on the back and sides. The side of both morphs are brown with a sparse distribution of white spots. While the ventral side of the animal have a distinctive salt and pepper appearance with sometimes a small amount of red pigment. It could grow 8-11 cm (3-4 inches).