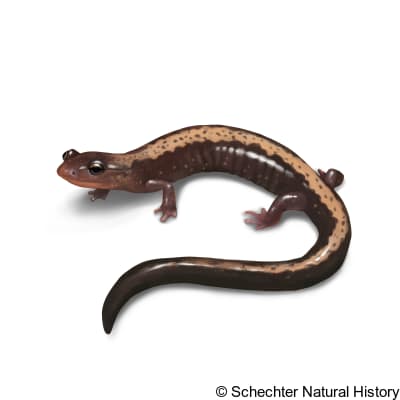 species of salamander is endemic to Virginia. Its found in 3 places at Shenandoah National Park Virginia which includes: hawksbill mountain, strongman mountains and the pinnucles.

In the three areas where they are found, theres the presence of moist soil with rocks and talus slopes. The hawksbill mountain have 3 types of talus which includes; type one talus which is characterized by rocks and no soil; type two talus which is made up of soil and leaf litters;type three talus which is made up of islands of soils under rocks. But the Shenandoah specie occurs more in type three talus, a little in type two and not at all in type one talus.They are less aggressive in territorial defence and so can easily be preyed on. Their defensive mechanisms includes:secretions, noxious skin and immobillity e.t.c They are inactive during dry periods and don't migrate. They feed on small invertebrates, insects, arachnids, centipedes, millipedes and worms. They mate during spring and autumn. Their eggs are laid in moist underground places. Females lay up to 4-19 eggs with an average of 13. The eggs are produced biennially. All larval developments takes place in the egg.

These specie of salamanders breathe through their skin and require damp environment for respiration. They are extensive in length up to 12cm with an average of 7.5cm to 11cm and slim in size. They have two colour morphs which are striped and unstriped. The striped morph has a narrow red stripe that extends through the entire length of its dorsum. The unstriped morph is uniformly dark and the dorsum posses reduced brassy pigmentation. Its lateral sides and belly have a black pigmentation. White spots are also noticed laterally and on the venter. There are normally 18 coastal grooves. They also possess four limbs.