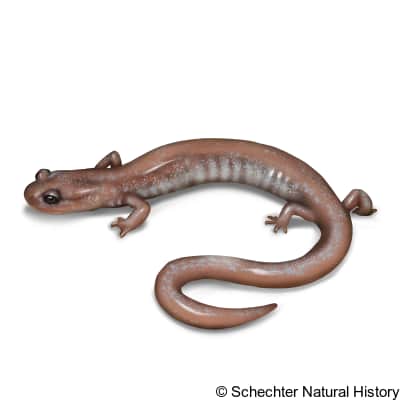 It is found in a very small area of the Siskiyou Mountains in northern Siskiyou county, California, hence their name, and in the Applegate River drainage in southern Oregon.

It is found in elevations of 488- 1078 meters and is highly associated with rocky or arid forested areas, especially in older forests. They are seen to largely populate heavily wooded north-facing slopes with rocky talus. It prefers to live in damp environments on land and will move about on the ground when the humidity of the environment is favorably high. They become active mostly on wet and rainy night and will usually not be seen in the dry summer and or freezing winter. It moves about a 7.5 square meter area and is thought to be sedentary. Its reproduction is terrestrial and its female will likely deposit eggs in rocky substrates in clutches with egg ranges of 2- 18. It feeds on small invertebrates, including spiders, mites and moths, catching them by lying in hiding then quickly grabbing them by surprise.

This salamander has no lungs and so breathes from its moist skin and tissues that line its mouth. It also has a naso-labial groove which is a vertical slit between its nostrils and upper lip. It is a slender animal with short slightly webbed toes on short legs. An adult measure 60mm- 75mm in total length (including the tail), and 110mm- 140mm from snout to vent. Its color is generally light brown to purplish brown on the dorsum with prominent white or yellow speckling all over its body and intense on its lateral sides and on the limbs. Its belly is grayish purple with light flecks. It may or may not show a faint light brown stripe.