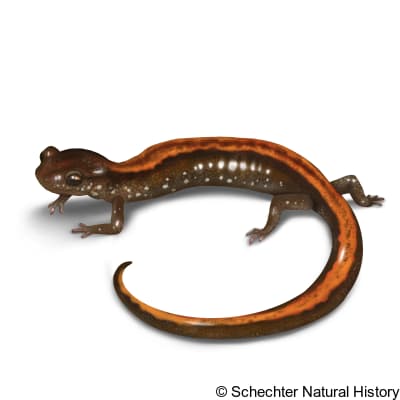 They occur on some coastal areas in altitudes of about 800m although it has been seen in altitudes as high as 1,250m. It is not strictly associated with a particular habitat as a variety of habitats have been recorded for this species including the temperate forests, rocky talus slopes and riparian areas. Western red-backed salamander species can be found beneath logs, moss, bark, stones in cool, shaded areas and in drier summers its adult go down to moist underground sites. This species does not migrate during its migrating season; it always maintains its usual habitat. Its reproduction is terrestrial and can mate variably from November to early March and this is determined by its incumbent geographical location. The female usually has biennial reproductive cycles, and retreats to their subsurface to lay her eggs. During the spring or early summer, she oviposits eggs which are usually 4-19 in a clutch and can be as large as 4.4m – 6.0mm in diameter. She also broods the eggs till they become hatchlings. Its food includes small invertebrates like annelids, isopods, snails, spiders, mites etc. and it is food for the garter snakes, shrew moles and carabid beetles.

This is a very slender animal that is built with relatively short fore and hind limbs. When in adult stage, it’s snout-to-vent can measure about 38mm to 55mm and its total length can be about 76mm to 115mm, this includes its tail. On its dorsum, it has a colored stripe dorsum which runs from the anterior of the head to the end of the tail and while this stripe’s color can vary from typical reddish orange to bright yellow, melanism is also recorded in this species.