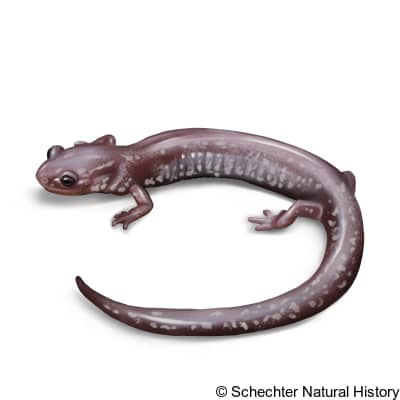 It can be found in Eastern United States. This species is on a decline and is nearing extinction. They can be primarily found in Shenandoah Mountain in West Virginia.

They are usually found in woodland areas. Adults may live up to 20 years. Every once in two years, females lay eggs of about 12 eggs which are usually laid in logs, damp areas, moss and humid fissures. After this, gestation occurs anytime from one to three months inside the egg. They feed on small sized beetles, flies, mites and other spineless organisms found in the soil. They are an endangered species. They are predominantly nocturnal in nature. To avoid being spotted by predators, they remain motionless.

This specie can be seen to have a venter that have white and black mottling. Some have stripes that run through the length of their bodies and most do not. The stripes are about a third of their entire body width. It has two unique color phases. An unstriped even dark phase and a phase that is characterized by yellow to narrow red stripes through the length of its dorsum. It has no lungs. The most common number of its vertebrae core is about 21-22. These salamanders are usually small sized and quite long. It possesses a high degree of morphological inclinations. It can reach a total length of 120mm.