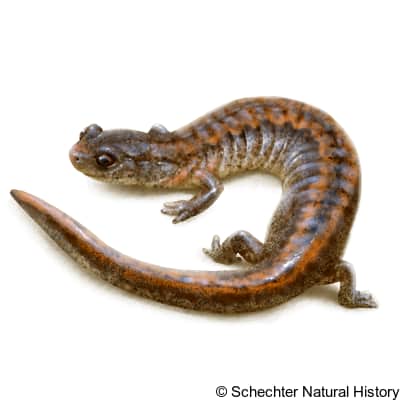 The Webster’s Salamander is a natural inhabitant of upland rocky woodlands, dominated by hard woods, as most species are reported under rotten logs and rocks. They are also discovered near springs and cave mouths. They forage along the forest floor in search of small insects like ants, wasps, termite, and larvae. The species found in South Carolina have continuous activity period, during which they forage and gather food. Reproduction is terrestrial and the mating period spans between January and March.

It is a small Salamander with a length of 2.75 to 3.25 inches. It is brown or dark grey on the sides, with a yellowish or orange-coloured stripe that runs longitudinally down the dorsum. Although, the stripe may vary from an even-edged appearance to that of a wave or lobe. The belly has splotches of dark spots on its light belly. Many species from Alabama have 18 costal grooves.