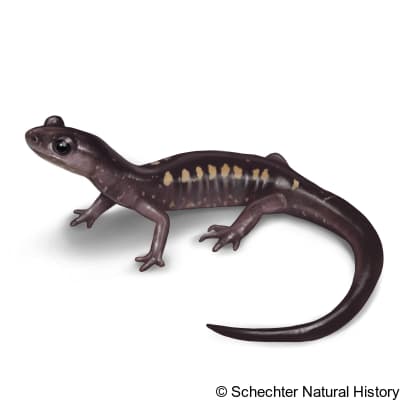 It can be found in New York, North Carolina, Kentucky and Virginia

It prefers to inhabit forests with high altitudes. It is usually found underneath rocks, logs and burrows. These specie is quite stationary. To avoid been dehydrated, it inhabits higher ground sometime between April and October and lower ground, from March to June. In high elevations, they are usually inactive. Breeding typically takes place once in two years. In early summer, a dispersion of eggs is laid primarily in moss, soil, damp logs or in crevasses. They feed on ants, mites, beetles, spiders and other spineless organisms seen in the soil such as annelids. Females have been observed to mature at 5years while males mature at about 4years.

This salamander has a mouth full of paravomerine teeth. It can grow to about 15cm. Its body may be brown or dark gray, spotted with an uneven course of yellowish, bluish white or whitish colors. Its undersides are typically gray. Salamanders that are prevalent in cave areas may be observed to possess a variant of coloration. Its tail is quite round and may be seen to be up to the length of its body. Their costal groove is usually up to 17. The dorsum of the adults typically are bold gray and spotted with white marks. The dorsal specks of the young ones however, are usually reddish and arranged in twos. It is lungless.