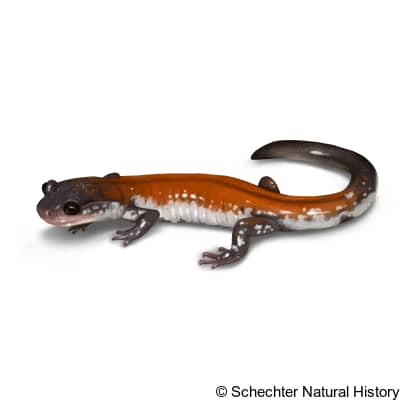 They are found under rotten woods and debris. They move from forest floors to underground sites during cold season. They feed on collembola, isoptera, lepidopteran larvae, dipteran larvae, coleopteran adults and larvae, chelonethida, araneida, acarina, diplopoda, chilopoda, Isopoda, and pulmonata. Some were also noticed to feed on centipedes, ants, and beetles. They aggressively defend their territories by producing secretions from their tails that ward off predators like birds. Courtship is in August. Females lay their eggs in august and underground.

It has a length of 11–22 cm. The lungless salamander has a black dorsal surface that is covered with red or rust colored spots. In adults the spot comes together to form a wide band throughout the entire length of their dorsal surface. The side of its body has gray or white spots. It's belly and throat are pigmented like the dorsal surface. It has 15-16 coastal grooves.