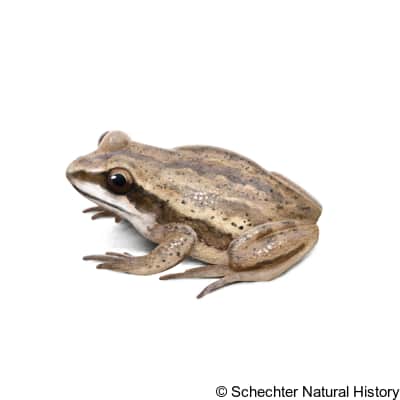 The Brimley’s chorus frog is mainly found at lowland regions, swamps and marshes that spread across the Atlantic coastal plain from North-eastern Georgia to the Southern Caroline county, Virginia.

The Brimley’s chorus frog naturally adapts to low, riverine wetlands, breeding in shallow ponds, swamps, woodland pools, shrub thickets, ditches and others. Its exact feeding pattern hasn’t been ascertained but it has been reported to feed on insects, spiders and debris. The Brimley’s chorus frog does not migrate and it remains active during winter seasons. Males often call beneath vegetation and it begins around February or March. Females begin to lay eggs from March to April.

The Brimley’s chorus frog has a length that ranges from 25-32 mm, with 3 dorsal brown stripes on an often yellowish-brown dorsal surface and a yellow Ventrum with brown spots. It has a dark brown or black stripe that runs down both sides of the nostrils from the eyes to the groin. Its legs are marked with dark longitudinal stripes.