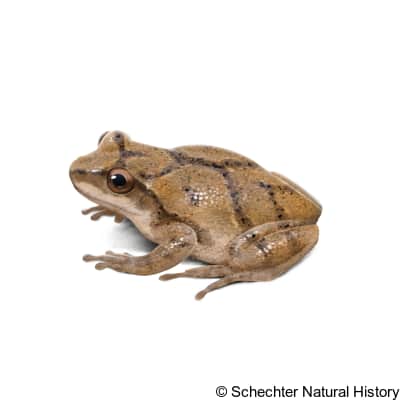 The Spring Peeper is found in the gulf coast from South-eastern Texas to South-Eastern Georgia and northern Florida, USA.

They naturally inhabit woodlands, forests and ephemeral wetlands. They also inhabit areas like swamps, marshes, and ponds as aquatic biome for their tadpoles and eggs. They are nocturnal insectivores so they are more active at night and feed on insects like beetles, spiders, ants, and flies. They hunt in low vegetation. Their Tadpoles feed on algae and small organisms in the water. While Southern spring peepers breed from October to march, the northern spring peepers breed between March and June. They lay around 900 eggs and are hidden under vegetation. When they hatch, they remain tadpoles for up to 3 months until they turn into frogs and leave the water.

Spring peepers have a dark X-shaped cross on their tan, grey, olive green or brown dorsal surface. The females are often bigger and lighter in skin coloration but the males have a darker throat and the ability to make high-pitched sounds. Their body length ranges between 25mm and 38mm and a mass between 3g and 5g. they have large toe pads for climbing.