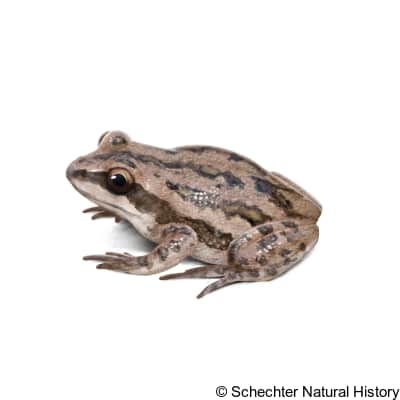 The Boreal Chorus Frog is found mostly in Middle America and southern Canada. Its range extends from ‘Great Plains’ states like Kansas, Nebraska and Wyoming to the Northern provinces of Alberta, Manitoba, Ontario and Saskatchewan. Reports also indicate an isolated population straddling the dividing line between Ontario, Quebec, and New York.

Boreal Chorus Frogs prefer to make their homes in forest openings around woodland ponds. In the far north, they’re sometimes found on the tundra. They will breed in almost any fishless pond with a depth of at least 3.9 inches, including splash pools, roadside ditches, flooded fields, beaver ponds, marshes, swamps or shallow lakes.

The Boreal Chorus Frog is small and smooth-skinned. It varies in color, from green-grey to brown, but always has two particular stripes: a dark one through the eye and a white one on the upper lip.