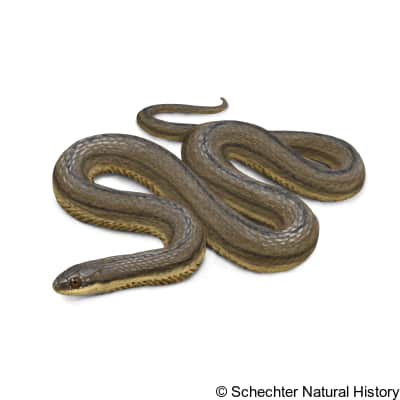 This specie ranges through the temperate region of North America. Its range goes from the east of the Mississippi River from western New York State to Wisconsin and south to Alabama and northern Florida. It can also be found in the southwestern parts of Ontario.

They are diurnal animals and inhabit shallow, rocky streams in agricultural, urban, and forested areas. These are usually in open patches that allow sunlight to reach the substrate. These loose rocks are used for shelter, and overhanging vegetation is usually present. Their diet is made up of crayfish, dragonfly naiads, small catfish, toads and snails. Mating usually happens during spring and fall. Their litter size is usually 5-13 with births happening within August.

It is a small to medium-sized snake whose total length ranges from 380 – 610 mm. The dorsum of its head, body, and tail are uniformly dark brown with a cream-colored lateral stripe on scale rows 1 and 2 on each side. The dorsal color is often darker on scale rows 3-5 than above. It also has 3 thin, very dark brown to black stripes which occur on its dorsum of some specimens, usually the young ones. It also has 2 dark brown to black stripes that break-up on its tail. They may also be thin or occur as broad stripes leaving a narrow, cream midventral line. Lastly, it has a distinct line which separates white supralabials from the dark brown dorsum of the head.