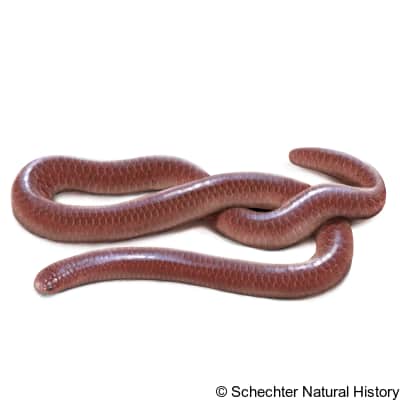 The western threadsnake is endemic specifically to the United States and Northern Mexico.

Naturally, the western threadsnake lives underground. It is commonly found in deserts and scrub where there are moist, loose and friable types of soil because of its need to burrow in search for shelter. Actually, they could also enjoy the sandy and arid regions, valleys, bottoms of mountains, bushy areas or even grasslands. Its diet consists majorly of ants and other insects, including their larvae and eggs. Amusingly, it attacks preys by trailing them to their nests. Notably, the snake is frequently preyed upon by various types of animals especially mammals, birds, fish, spiders and even snakes. This blind snake in itself, possesses defensive behaviors like releasing musk or poking with its tail spine (although harmless) during attacks or attempts to capture. In situations like this, it’s smooth and tightly overlapping scales serve as protection against stings and bites of ants. As a secretive and nocturnal snake, the western threadsnake reproduces by mating, often times, in the spring and then lays 2 to 7 tiny 5/8 inch long eggs underground during summer.

The western threadsnake, referred to as the western slender blind snake or simply, the western blind snake, is a specie of snake that belongs to the family Leptotyphlopidae. Although a snake, the specie of snake looks very much like a lengthy earthworm. It is in fact as thin as an earthworm. Fortunately, this particular snake has a thick and sturdy skull that helps in digging holes or tunnels underground for shelter. On top of the head, there are ocular scales and distinguishingly, this snake has a single scale centrally located on the oculars on the head. Its head and the tail are quite blunt and edge less. The head, the neck and the lower jaw are countersunk and on the lower jaw are a small number of teeth while the upper jaw has none. Naturally, the western threadsnake has no use for vision so the eyes are vestigial and nonfunctional. They also have black spots on the head that are visible under lights. Unlike most snakes, the ventral scales here are not widened. Its scales are wormlike, shiny and mostly purple, pink or silvery-brown in colour. It has at the end of its tail, a small spine that it leverages on. Generally, these species are fluorescent under dark light.