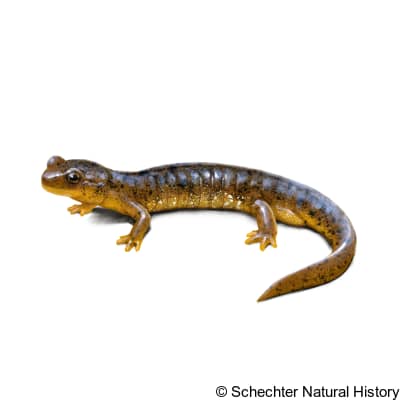 This specie can be found in the Pacific Northwest from Northern California, extending to Northern Oregon.

This specie can be found in shallow, cold and clear well-shaded streams. They can also be found in waterfalls and seepages. They are mainly aquatic creatures but can also do some terrestrial activities. Also, adults are active even in very low temperatures. Breeding could happen anytime during the year, but the top periods include during August and September. About 4 to 16 eggs are laid and it could take 8 months for them to hatch. This usually occurs during the spring. Their diet is made up mainly of aquatic and semi-aquatic invertebrates. This could include amphipods and springtails.

The Southern Torrent Salamander’s length ranges from 40 – 62 mm from its snout to vent. Implied by its length, this salamander is medium-sized. This specie also has a slim body accompanied with a short tail. They also have a small head accompanied with large protuberant eyes. This salamander is olive to brown dorsally along with dark and light speckling. However, its ventral surface is yellowish, also with dark and light speckling. Its eyes are big and dark. These eyes are marked with metallic gold. The male specie differs a bit from the female specie. The male salamander has distinguishable squarish cloacal lobes.