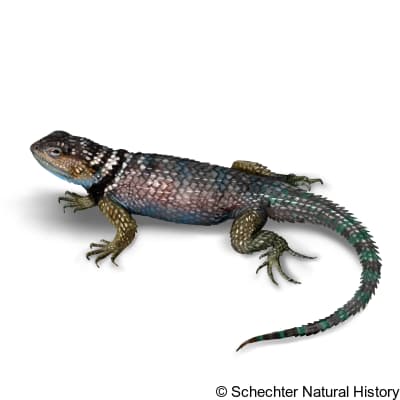 The S. cyanogenys can be found near Falcon Dam (north of Roma in Texas) and further north in Del Rio Texas. They can be found in several disjunctive populations in northeastern Mexico including north Coahuila, Nuevo Leon, southern Tamaulipas, Veracruz, and northern Yucatan Peninsula and central Chiapas.

These lizards occur in arid or semi-arid climates with rocky terrains where then can be seen on boulders, cliffs, rock piles and manmade structures like bridges, abandoned houses or rubble. They shelter themselves underground and in rock crevices. They feed on small invertebrates like roaches, caterpillars, crickets, and worms. The lizard is live-bearing and have their hatchlings from February to June with clutches of up to 18.

This species of lizard is the largest of spiny lizards in Texas. S. cyanogenys can grow total lengths of 5 – 14 in. Its coloration varies with sex; males have a blue throat and chin, and blue belly patches. The males also have metallic green or blue pigmentation on their backs and white flecks on their tails while the females and juveniles lack the blue-green coloration and belly patches. Although, male and female both have a dark band that runs across the neck, bordered by a stripe of white (or lighter) color. Both sexes also have head and limbs that are dark brown. The lizard has a long tail that is patterned with a vague band of a dusty color.