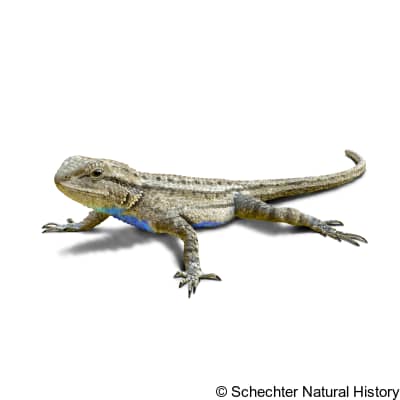 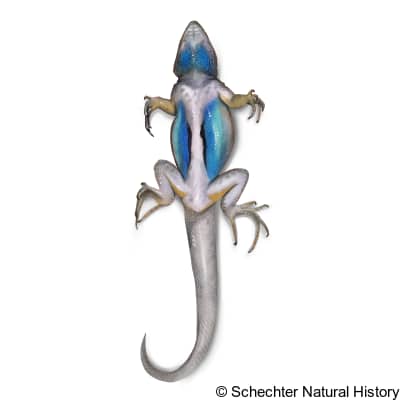 Found on the ground or low perches in grassland, woodland, sagebrush, rocky canyons, open coniferous forests, and talus slopes. Does not inhabit severe deserts, but can be found near the deserts on mountain slopes. Commonly seen in suburban dwellings on basking sites like fences, woodpiles, and walls. Typically feed on insects including flies, beetles, ants, spiders, and caterpillars. During the winter, they are generally inactive.

Known for having large, overlapping, and pointed scales on back and limbs. Color can vary but is usually black, brown or gray with wavy dark and light bands across back. Thigh rear is yellow or orange and exhibits mostly keeled scales. Snout-vent length up to 3.9 inches (9.9 cm). Tail can completely detach when being threatened and allow lizard to escape. When breeding, males exhibit a blue patch on the throat, a blue black-edged patch on either side of the belly, two enlarged scales behind vent, and two swollen copulatory organs below tail base. Mating occurs in spring, and eggs are laid from April to July. Clutch size ranges from 3 to 17 depending on female's size, elevation, and latitude.