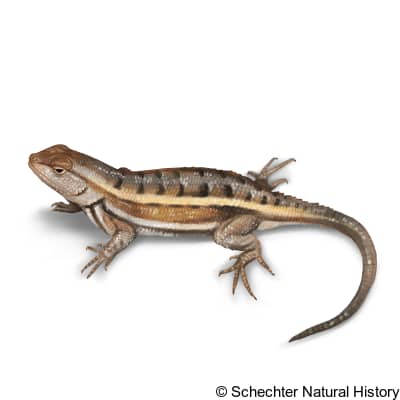 This reptile can be found in Chiricahua mountains, Arizona and sometimes in the mountains of Peloncillo, also in Arizona, USA. Outside the USA, like in Sierra Los Ajos, Sonora in Mexico this species has also be observed to thrive.

It prefers to dwell in elevations ranging from 4800’ to over 8500’. Being a mountain dweller, it can be found in Evergreen Woodlands and Conifer Forests. Access to sunlight influences its habitats and activities. It is a diurnal lizard, becoming very active in the daytime. The Striped Plateau lizard reproduction period is around April and May and will lay up to 5 to 15 eggs in a burrowed nest around June or July. Eggs mature in August and hatchlings emerge. Its hibernation period occurs during these winter periods and also in late fall. It is a territorial creature, and prefers flight when confronted by threat of capture especially to the top of trees. Its meal comprises of grasshoppers and a variety of insects, not excluding centipedes.

An average adult is observed to measure about 70millimeters from the snout to the vent. A male variation of this species is smaller, sometimes not exceeding 61millimeters in snout to vent length. Tail lengths varies greatly. An adult lizard can be seen to be of a wide range of shades, however of the same color. It usually sports the brown color, with darker gray-browns to bright orange-browns. While this is the general body color, it has different markings and patterns on its body which differentiates it from other similar species. Some of these patterns include two yellow-to-cream stripes on its back that extend from the neck to the base of the tail. there are also whitish-gray stripes one on each side of the lower sides of its body. Two rows of nice looking brownish-gray blotch-like patterns (with a white decimal-like dot in the center of each) that are arranged across the length of its back, arranged just inside the two stripes which act as borders containing the blotches. The underside appears somewhat pale cream color and is left blank of patterns, however coming up to the throat and chest there are seen sparse dark flecks spotting these areas. It looks fat around the belly when you view it from the top or laterally, and has a seemingly big head which contrasts the streamlined shapes of most lizard species. Scales are cover the dorsal sides of the body from the head to the tail. These scales appear pointed and keeled as if they are prickly and sharp, and reaches over its entire skin except the underbelly, chin and underfoot and everything else underneath it. The scales on the side are ordered in diagonal rows and are seen to point up and backwards.