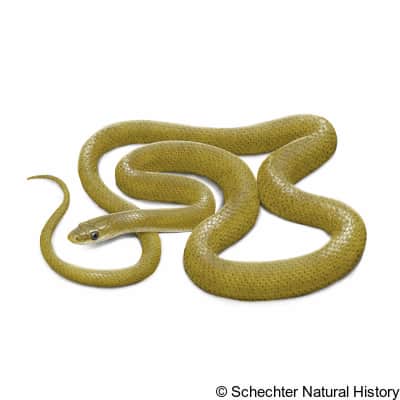 They are natural inhabitants of the Madrean Evergreen woodland and the upper reaches of the semi-desert grassland communities. They are often reported to be seen on steep, rocky slopes and along drainages. They are often active during the day or twilight. They are seen, foraging in the branches of trees and bushes but they dwell more on the ground, sheltering under large rocks, boulders, outcroppings, and rock piles. They hibernate during the cold months of winter and late fall in Arizona. When the green ratsnake is encountered, it remains motionless to avoid detection. It feeds on small mammals like; birds, lizards, and bats, killing them by deadly constriction. They mate during spring and adult females reproduce during late spring or early summer, birthing a clutch of up to 9 eggs.

The green ratsnake can grow to a length of 63 inches, with a dorsal pigmentation of green or olive-green and a light-yellow ventral surface. It has an elongated head, a slender body, and smooth dorsal scales of 31-39 rows. The juveniles are grey or grey-green with grey-brown dorsal blotches, but the blotches change to green as it ages. Females are often longer than males but both have round pupils on the eyes.