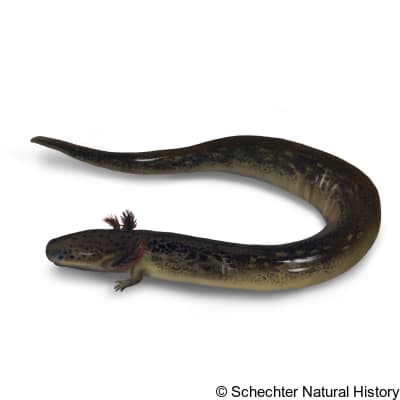 The range of this salamander extends from the Atlantic and Gulf Coastal Plains – from Washington, D.C., to Virginia on south to Florida then west to the eastern parts of Alabama. There are further reports of a disjunctive population in the Rio Grande.

These salamanders do not have a terrestrial development cycle and can only be found in aquatic environments throughout their lives. The salamanders thrive in swamps ditches and ponds with dense vegetation. Although not exclusively, as they can also be found in lakes and streams. Females find shallow water to lay eggs and the hatchlings live among the vegetation then migrate to deeper water as they age. The adults can be found at the bottom of aquatic pools; plant roots, under sunken branches and sunken logs. The greater sirens are carnivorous and are active at night. They feed on insects, crustaceans, gastropods, spiders, mollusks, crayfish, and small fish. Although, there are reports of algae in their digestive tracts. This causes leading researchers to believe that they are omnivorous. Breeding season occurs from February to March, and they breed only once a year. Females produce an average of 500 offspring per year

These are large eel-like salamanders that possess external gills, two reduced forelimbs (containing four toes each), no hind limbs and a flattened tail. The average salamander length range is between 24.40 -27.56 inches. They are generally olive-green or grayish-brown with black speckles yellow or green spots along their sides and back but coloration varies widely within this range. Greater sirens typically have 36-40 costal grooves. Hatchlings have stripes and a yellow or red triangular marking on the snout.