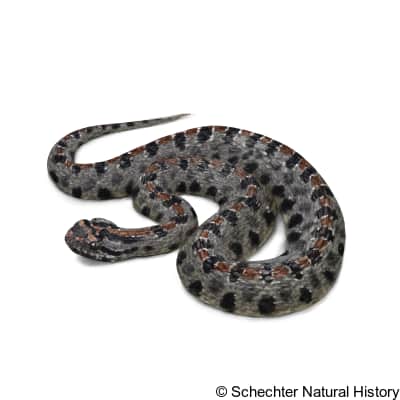 These snakes are often found in the southeastern part of the United States. The range extends from the Florida Keys, stretching all the way north to Missouri, and the southern regions of Kentucky and North Carolina. The range of this snake also expands west into Texas and a significant part of Oklahoma.

They are generally found in areas near water sources including areas such as marshes, creeks, and swamps. They can still be found in pine and scrub oak sandhills, scrub pinewoods, etc. The pygmy rattlesnakes are usually well-camouflaged in their environment and spend a lot of time waiting in ambush in leaf litter. They prey on lizards, frogs, small mammals, and insects as well as centipedes. Females give birth to live young in the late summer or fall.

The pygmy rattlesnake is small at 14-22 inches. Both males and females have the same size (an average of 20 inches). It has nine large scales on the top of the head and a stripe that runs from the eyes to the corner of the mouth. The rattlesnake has varying patterns but they can be found in tan, black, gray, brown, light red, pink. The patterns and colors are usually related to their location or environment. One standing pattern is that that all have alternating red and black spots in their mid-dorsal section with black blotching on the sides of the spots. The rattlesnake is fanged and its tail color changes as they mature. Juveniles have tails that are bright yellow but they darken as they mature. The rattles are small, segmented, brittle, and are made of keratin. Juveniles do not have rattles.