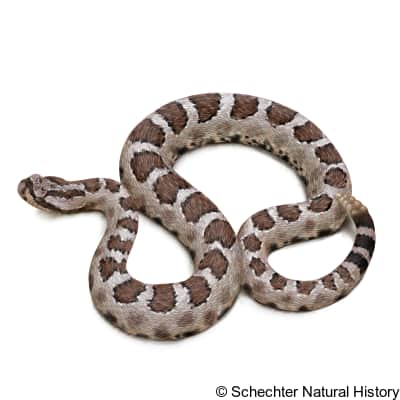 The western massasauga can be found in areas including the San Carlos Apache Reservation, Graham County in Arizona, and in Central New York in the United States of America. It can also be found in Georgian Bay in Ontario, Canada, and in Cuatro Cienegas in Coahuila in Mexico.

The Western Massasauga’s habitat includes but is not restricted to wet meadows, marshes, woodlands, short grass prairies, desert grasslands and oak scrublands. It is a nocturnal animal. Reproduction habit studies says it starts breeding from March through October. Mating occurs in between spring to fall season while births period can range from late April to August, sometimes through late September depending on its location. Being a nocturnal animal, the western Massasauga can be seen during summer slithering around in hours after dusk. However, it can as exceptions on various occasions seen for several hours after sunrise, and on overcast days in late afternoons. Their movements and on-ground activity increase with the regression of springs and inception of monsoon rains. This species is a carnivorous predator with a wide variety of prey which range from large centipedes, lizards, various small mammals and snakes. The Plain black-headed snake is on the diet of this large rattlesnake.

A western Massasauga is a somewhat stout snake that looks stunted. The illusion is created because of its size in width across the length of its body. That being said, an average adult can measure about 500-700millimeters from the snout to its to vent. Its base color is gray, near the vertebral column it is silver and meekly merged with red-like brown on the laterals. A brown mask that is highlighted by thin white pigmentation extends from the eyes to the back of the edge of the mouth. There are patterns on its entire body that markedly makes this snake a very beautiful species worthy of spectacle. Blotches that are shaped like lyres are one of such patterns and they reach from the back of the head and into the neck. Up to 33-40 brown chocolate blotches mark its dorsum, lining up medially in a row on its back. The tail of the western Massasauga is usually orange or yellow in juveniles, but after a year there’s a color change to a less bright gray color marked by 5-10 brown colored bands. Its belly is of a uniform light brown to gray color and can be seen to have somewhat darkened flecks. Its tail ends in form of a rattle thus generically classifying this species as a rattlesnake. This rattle has scales that look like miniature plates on the top of its head.