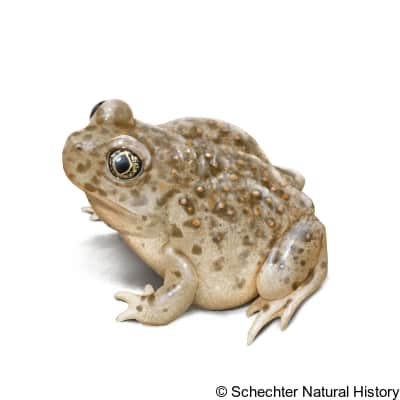 The western spadefoot toad is an amphibian species endemic to western California in the United States, and Mexico.

The western spadefoot prefers open areas with gravelly soils, including woodlands, grasslands, lowlands, scrub, foothills, mountains and sandy washes. Juveniles feed mostly on plants while Adult toads feed on mainly invertebrates, spiders, flies, earthworms, grasshoppers, ants, moths, tree bugs and ground beetles. They are nocturnal and are most active during wet and summer seasons. The western spadefoot becomes sexually mature in the third year. Females lay about 300-500 eggs, which attach themselves to underwater vegetation, eggs hatch quickly and the tadpoles emerge in 15 hours. They have the fastest known metamorphosis for any toad or frog which takes 12 to 13 days. The breeding of eggs usually occur from January to late March

Adult toads are between 1.5 and 3.0 inches in length, with short legs and wart skin. They have light-colored golden eyes and vertical pupils, with a shiny black wedge-shaped spade on each hind foot. They have a whitish ventrum, their color may be greenish, cream or brown, with 4 asymmetrical white stripes and dark blotches on the back, their skin tubercles tipped in red.