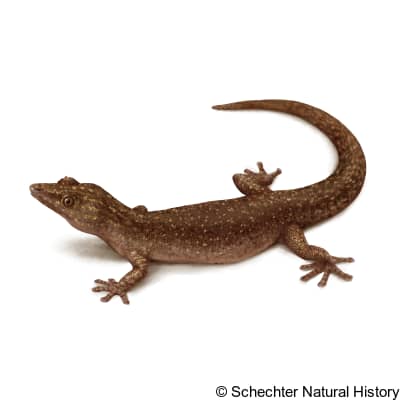 The Sphaerodactylus Elegans is native to Cuba and its surroundings but was introduced into Florida in the early 20th century. It has since thrived in the region.

The ashy gecko lives in dry to semi-dry areas. They can be found under discarded garbage, woody debris, chopped plant parts and stones. They are also easily found around the home. They run well on smooth surfaces thanks to the adhesive pad on their claws. They are usually active in the morning when they come out for some sunlight and late afternoons. They are oviparous and females lay an egg every 3 weeks after mating. They feed on small insects such as crickets.

The ashy gecko is about 2.8 inches and has a pointed snout that is about 39mm. The base coloration is red-brown with rings of black horizontally across it and beige lines and dots. The tail color is different from the body with a beige base and reb brown lines. The limbs seem opaque when compared to the body as it is a variation of the colors. The dorsal area is gray-white. The eyes have the ciliary scales above it and move independently of the other.