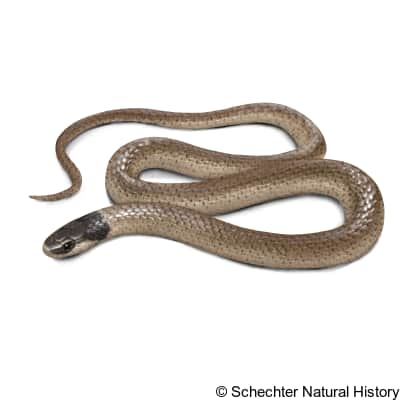 The Tantilla yaquia is known from the Canelo Hills. It also can be found at the Pajarito, Santa Rita, Chiricahua, Atascosa, Mule, Pedregosa, Swisshelm and Peloncillo mountains of southeastern Arizona. Additionally, it can also be found at elevations ranging from 3,300’ to about 6,000" in Arizona.

This snake resides in Madrean Evergreen Woodland. It is also found in Semidesert Grassland communities. Additionally, it is found in rocky, wooded canyons and on neighboring slopes. It is nocturnal, secretive and a ground dweller. It also spends most of the time under rocks, logs and leaf litter. It feeds on a variety of invertebrates. The female snake most probably lays a small clutch of eggs, usually less than 4, in summer. Although, facts about reproduction is poorly known.

The Yaqui Black-headed Snake is a small grey or tan snake of about 325mm in total length. It has a dark grey head cap. A thin white or cream collar borders the posterior edge of its head cap. This head cap extends back about 2 – 4 small scales being the parietal furrow. This dark head colouration enwraps down the sides of its neck behind. It also goes below the corner of the mouth. Behind the eye, a white patch marks each cheek. The belly of this snake is cream anteriorly grading to orange or light pink posteriorly. They also have smooth scales and a small head almost non-distinguishable from the neck. Lastly, it has enlarged and grooved teeth in the rear upper jaw.