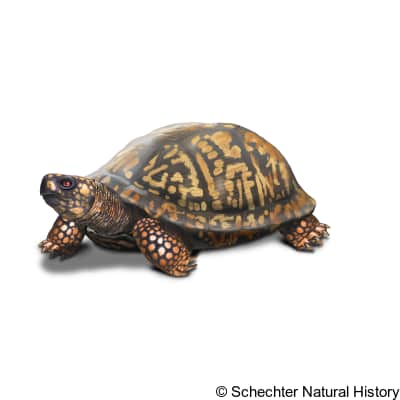 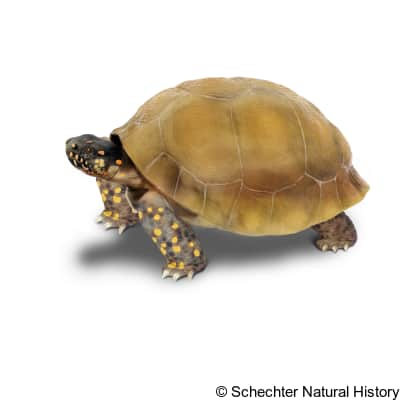 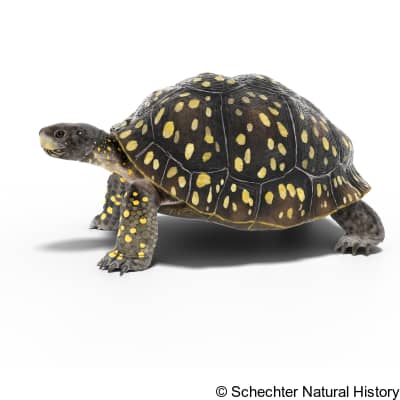 Large range covering most of the eastern half of the United States, as well as areas of eastern Mexico.

Eastern box turtles will inhabit open woodlands, marshy meadows, scrublands, grasslands, swampy areas, and suburban areas. They are often found near roads or they get hurt trying to cross roads. They like to take shelter in leaf litter, under logs, and in abandoned burrows. In the northern part of their range, they hibernate underground through winter.

A terrestrial turtle with a high-domed carapace and a plastron with a single hinge that allows the turtle to close its body within the shell entirely. It is a relatively small turtle that typically reaches 4.5-6 inches in length. This species has a distinctive hooked upper mandible, and non-webbed tortoise-like feet for walking on land. Its shell is smooth, but individual scutes have very slight peaks in the center. The edge of the shell is not serrated. The coloration and patterning of this species is highly variable, but they are generally brown with yellow, orange, or red markings on their skin and shell.