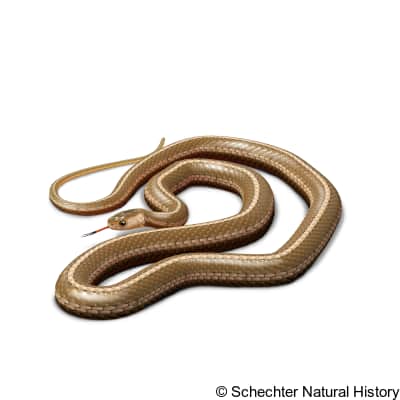 It can be found in Northeastern part of the United States. It is primarily present in Pennsylvania, Michigan and New York.

Short headed garters snakes prefer to stay under hooded objects like logs and rocks. It feeds mainly on earthworms and other annelids. If this is unavailable, however, they may feed on fish. It is usually found in woodlands, forests and at other times, near bodies of water. Breeding typically takes place in spring. Some females breed yearly while other breed once every two years. Most commonly, females are seen to have already developed ovarian follicles.

This specie is quite small, compared to other garter snakes. It has a small sized neck and head. Its head is akin to the color of its dorsal background. It has an olive brownish, brownish or greenish dorsal background. It has three stripes on its body. One is a bright yellow colored vertebral stripe and the other two stripes, though faint, are lateral. It may grow to about 25 inches. Unlike other garter snakes, it does not have dark spots between its stripes. The females have a more engorged sex organ than the males.