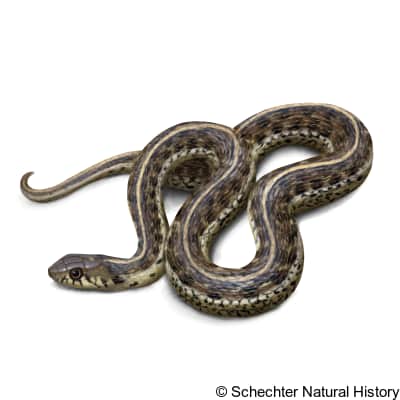 Ranges from central and southeastern Arizona through most of central Mexico. Also including a small area in southwestern New Mexico.

This semi-aquatic species is found in and around streams and rivers in desert scrublands, semidesert grasslands, and woodland habitats.

A rather large species of garter snake, reaching 44 inches in length. It has keeled scales, large eyes with round pupils, and a defined neck. It is generally dark green or brown with a distinct cream-colored stripe down the center of its back to the tip of its tail. This central stripe is sometimes bordered by thin black lines. Each side is marked with a less defined lateral cream line. There are alternating rows of dark blotches in the spaces between the light lines. Its ventrum is pale and unmarked, and it has thin vertical dark bars between the scales of the upper lip.