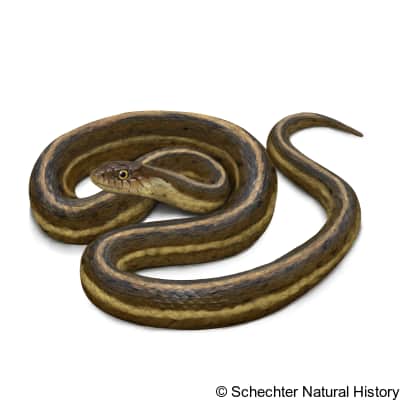 Found in central California between the Coastal and Sierra Nevada mountain ranges.

A semi-aquatic species that prefers wetland habitats. Due to habitat loss, it is now often found in artificial wetlands made for growing rice. They are only found near still or slow-moving water with emergent vegetation. On land, they spend much of their time burrowed underground or within leaf litter. They avoid open or rocky habitats.

This largest species of garter snake reaches 3-5.4 feet in length. It has mildly keeled scales and distinct pattern of 3 light longitudinal stripes running from the neck to the tip of the tail on a dark background. The central stripe over the spine is brighter, while the 2 lateral stripes are more faded. It has broad jaws and a distinct neck. Its eyes are somewhat large with round pupils. Ventrum is pale and unmarked and tinted the same color as the stripes. Juveniles lack the distinct stripes which become brighter with age. This species is mildly venomous, but virtually harmless to humans.