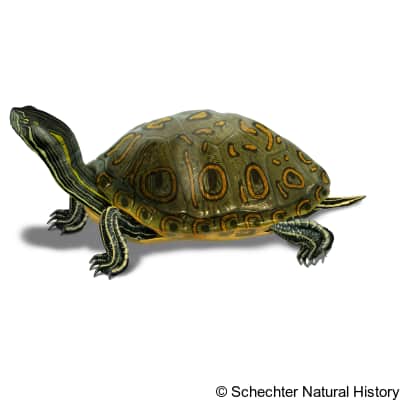 The Meso-American Slider or Trachemys venusta ranges from The United States to northern part of Argentina.

This species inhabits lakes and streams. The Meso-American Slider or Trachemys venusta feeds on tadpoles, insects, crustaceans and fish. The females can lay up to thirty-five eggs per clutch several times. Hatchlings emerge after about sixty-nine to one hundred and twenty-three days.

This species has a total length of about 16 inches. Meso-American slider has a dorsum that ranges from dark brown to Olive green. There are round spots on its carapace with yellow markings bordered around the spots irregularly on each side of the body. The Trachemys venusta has a dark brown head with green markings running down its neck to its shell or carapace. The legs of this species are dark brown or black with no markings or spots on them. The legs are relatively long in appearance. It is a nocturanl creature.