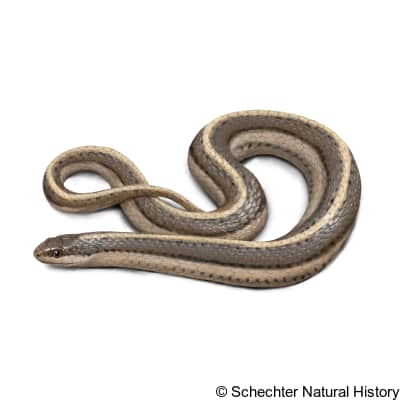 Natural and human-made habitats including hills, edges of woodlands, prairies, suburban yards, and abandoned urban areas. Prefers wet areas, but is found equally near bodies of water and in more landlocked regions. Commonly found under shelters including rocks, logs and trash. Diet is mainly limited to earthworms that are hunted at night or after it has rained.

Dorsum is olive, gray, or brown. Possesses one stripe down back and one on either side of body; stripes vary in color from white to orange and are followed by a row of black spots. Exhibit a green venter with rows of crescent blotches. Fully grown individuals can be as long as 54 cm but usually will range from 22-38 cm. Females reach sexual maturity at 2 years old while most males can mate at 1 year old. Females give live birth to between 2 to 12 young; young are self-reliant when born.