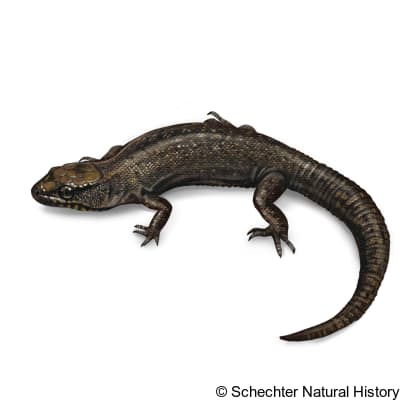 They are found in California along the base of the Sierra Nevada on the eastern side of the San Joaquin valley. They are also found along the granite station of the green horn mountains.

They are found in rocky outcrops around granite station, underneath granite caps and flakes. They spend most of their time underground. Their tail easily breaks off and it’s used to distract predators long enough for the lizard to run. They feed on small invertebrates like ants, spiders, caterpillars, termite, crickets and beetles etc. They breed in late spring. Their young are born live about 1-3 per brood in august to September.

They have a maximum snout vent length of 51 mm. The adult male has a snout vent length of 46 mm, a tail length of 63 mm and a head length of 10.5 mm. They are small, thin, have a soft skin and granular scales on most of its body. There’s also the presence of a broad post orbital stripe and a transverse row of gular fold. They have dorsal head scales divided into internasal, frontonasal, prefrontal, frontal, front parietal, parietal and occipital. The ventral are in 12 longitudinal rows and 32 transverse rows. The head is covered with plates. Their eyes are lidless with vertical pupils. Their dorsal scales occur in 40-44 rows at mid body. The dorsal surface of the head is a shade of brown but the scales around the eyes are darker. The color of the dorsal surface varies from olive to brown or grey with spots of light brown or black which go on to form a net like pattern. Their underside is white and made of large square scales.