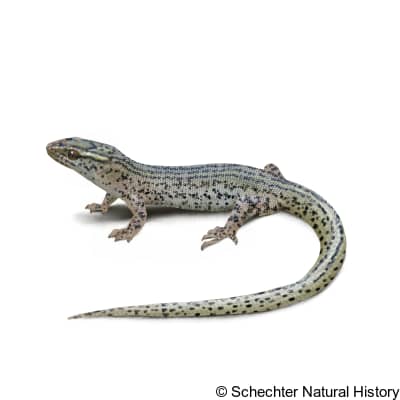 Most of inland southern California through southern Nevada and far western Arizona. Also some areas of southern Utah.

Inhabits arid or semi-arid environments, often near various yucca species such as the Joshua tree, Spanish dagger, or Spanish bayonet. It usually hides under natural ground debris, inside plants, or between rocks.

A long, narrow-bodied lizard with a somewhat dull appearance and a thick tail. Its head is small with relatively large, round eyes. Its smallish legs are set far apart. It is primarily olive-grey with slightly darker faded speckling all over. The speckles are arranged in several lines down the center of its back. It has a single light stripe running from behind each eye and fading into the neck. It is known to change color to a darker brown during the day. The scales on its head are shiny and smooth, while its body scales are granulated. It reaches a total length of 3-5.5 inches.